Which One Doesn't Belong and MP3

If you haven't been playing with Which One Doesn't Belong then get thyself over to Mary Bourassa's blog and read up on it and its origin.

The short version:  you are given 4 pictures, graphs, shapes, whatever, and you have to decide which one doesn't belong.  The coolest thing?  There is no right answer!  Or wait, yes there is: there are FOUR right answers!!

Try this:  Which of the 4 words you see below doesn't belong.  WHY? (oh yeah, that WHY is the very best part, the frosting on the cake so to speak!) 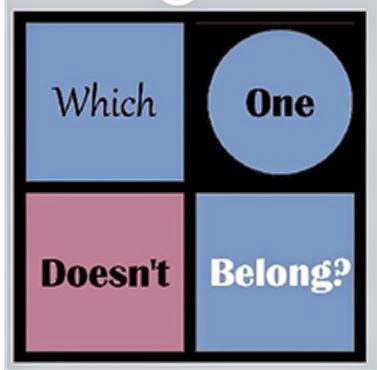 Last Tuesday on the Global Math Department, Mary and fellow collaborator Chris Hunter presented Which One Doesn't Belong? They encouraged us to participate with them as Chris was showing how he comes up with the four items that will make up the WODB.

My Geometry class has been doing investigations with special parallelograms.  I thought it would be fun to get them to a WODB on that topic.

Before I go on, let me tell you that my professional goal this year was to listen more and to get students to REALLY work on the eight Standards for Mathematical Practice.  In particular, I wanted them to be really comfortable with sharing their thinking and be able to critique their own reasoning as well as the reasoning of others (MP3). I want them to understand that critiquing includes telling what you thought was great and what you are confused about, not just disagreeing with what was said (though that, too, is an important skill.)

I introduced the students to the "game" of WODB by showing them the slide above, then.....

with MP3 in mind, I presented this slide: 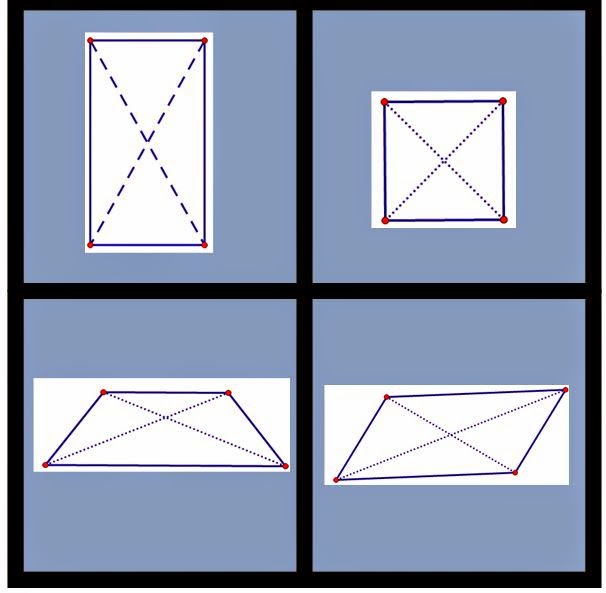 I tweeted this slide out, too, and got some WONDERFUL comments about it and how to improve it.  I want to explain why there are no angle marks, no parallel markers nor tic marks:  I wanted to see if they "got" it.  Would anyone call me (or one of their classmates) on it?  One of my four class rules is Don't Make Assumptions.

They had a blast: so engaged.  Kids who never say anything were practically jumping out of their seats (and I number the squares as though they were quadrants, btw, because I find that these cherubs don't know about Quadrant I, II, III, and IV!).

We decided that I would have to go fix the "rectangle" in Quadrant II, so it would have something unique to it.  It originally had the dotted diagonals, same as the others. We just couldn't figure out how else to make it unique, though just as we about to give up, one student jumped up and said: "It's the only 'tall' one!  Taller than it is wide!!"  The others clapped.  One suggestion to "fix" the rectangle was to change how the diagonals were made, and another suggestion was to change its color.

This was all happening just before the bell and I praised the student who said "It appears....." because that was the closest to admitting there was no proof that any of these were any thing more than mere quadrilaterals and that almost ALL of us had broken Palmer's Rule #3.

After watching the conversation about this on Twitter (I was too busy at school today to be able to do more than glance!), I thought I would make a second slide with the marks on it: 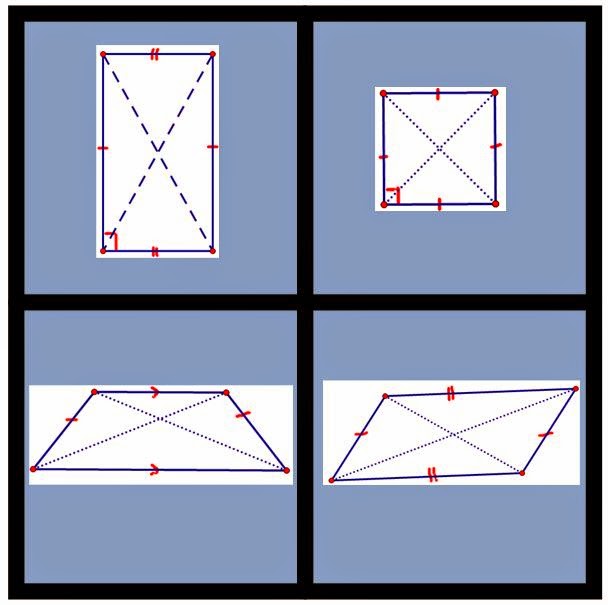 When I do this with next year's class, I may just show the unmarked slide and then this second slide, and ask them which is better and why?

Which do YOU like better?  Is too much information too much??