This week was a short week, because Veteran's Day was celebrated on Wednesday.  I had to really push to get what needed to be 5 days' worth of work into 4.  AND it is my policy to never give homework on a holiday, so whatever practice I wanted them to do on Tuesday, had to be worked into the class time.

The result was only one number talk this week, and a missed opportunity to point out how frequently they used the commutative and associative properties. 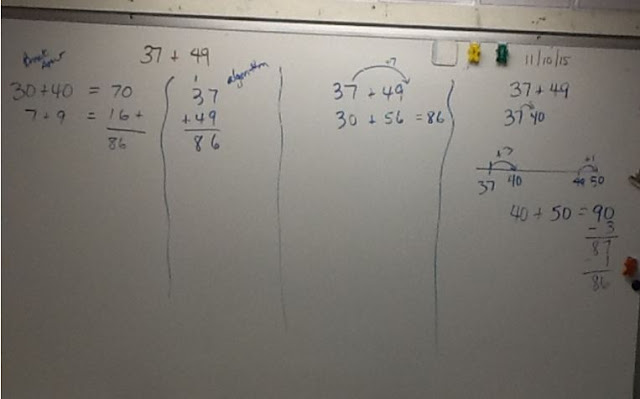 The first student used the strategy of starting from the left, which I misnamed as the break apart method.  This is definitely the strategy most students (who didn't use the traditional algorithm) used.

The second is the traditional algorithm.  I asked her how she kept track of what she had and she said she could just mentally do this by looking at the numbers on the board and picturing them one above the other.

The third used the take and give strategy.  He took some from the 37 and gave it to the 49.  What amazed me is that he took 7 to give to the 49, not just 1 to make it 50.  This led to a number talk inside a number talk when I asked him how did he add 7 to 49 so quickly!  He said he could just do it: "I'm weird like that!"  Others begged to share how they did it (the favorite way was to add 1, then add 6 more), then got back to one more strategy.

This is the round and adjust strategy.  As I started to record what this student was saying, she said it might be easier if I showed it on that "number line thing you do".  Ah yes. It is getting through!

It was the third strategy where I really missed a great opportunity to discuss how breaking it apart and giving a piece to the second addend is really just the commutative and associative properties in action!  I am very disappointed in having missed this chance since this is an Algebra 1 class and we have been talking about the properties.  Sigh.

I will have to do another with them and hope for the same chance.  Next time:  3 digits plus 3 digits in the hope of them discovering that other strategies can serve them better than the traditional algorithm, or at least that they have a better understanding of what "borrowing" means.
Posted by Tina Palmer at 8:43 AM