We did some multiplication number talks this week.  I suppose it should not come as a surprise that a few students did the algorithm in their heads.

"Can you help us understand why you put the 0 here?"

First of all, I was impressed that anyone could keep all that in her head.

Second, I asked if anyone wanted to share another strategy.
Thankfully, the very next strategy perfectly mirrored what the algorithm girl was trying to do. 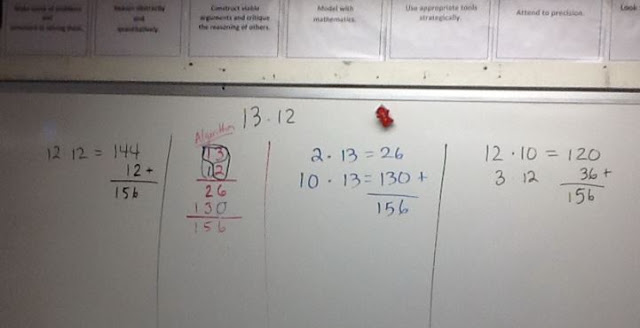 After the students were done sharing, we went back and noticed how the two strategies were related.  I wanted them to see that the 0 isn't just something that you put there as a place holder.  I wanted them to notice what they were really multiplying by.  I didn't do any of the talking.  Other kids pointed out how the one related to the other.

All in all, a good talk.

For the next one, I want to pick a problem that will work nicely with the halving and doubling strategy.
Posted by Tina Palmer at 7:20 PM