In my warm ups,  I am trying to incorporate some of the typical Data and Stats questions from the MCAS (state test) that my sophomores have to take in May.  Many of them haven't dealt with mean, median, mode, etc since middle school and some forget ever even SEEING some of the data displays.

While poking around the MCAS Test Questions site, I came across this one.  Honestly! 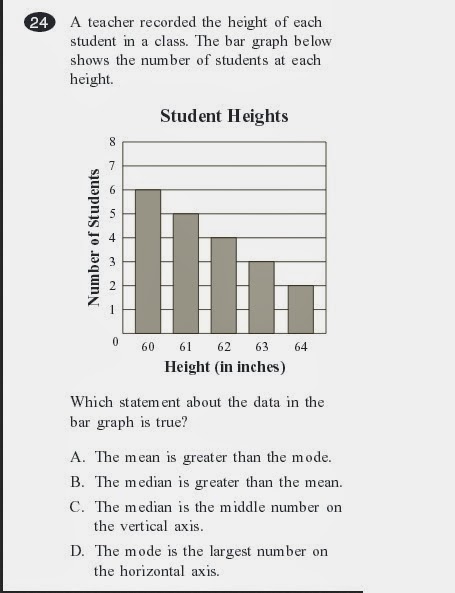 Such a MEANINGLESS question that leaves kids scratching their heads.  THIS is an example of what we hope our kids can do???

I am hoping that the kids who grow up and are in charge of taking care of me in my dotage can do a whole lot more than this!

And here is one more.  LOVE that the word "greatest" and "median" get used in the same sentence.  I sat and looked at this question for a while wondering what the heck they were trying to get at. 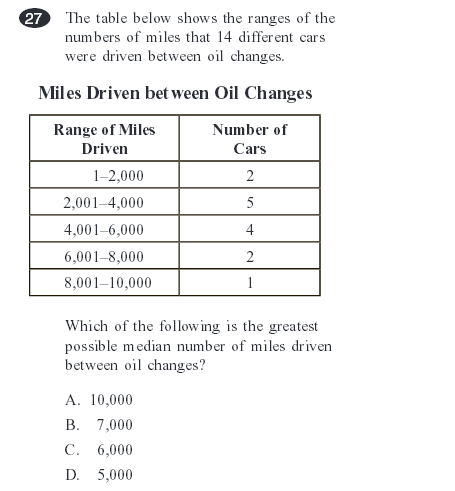 Today I Shut Up

Today I shut up.  And I listened.  And great things happened.

My Geometry students came to me with several major weaknesses.  One of those is that they have a REALLY hard time with patterns.  Since patterns show up on the state test, it is an area that I need to spend some time on with them, but because we a vocational school, I have these cherubs for only 90 of the 180 days.

Here is where Fawn Nguyen's Visual Patterns website has come to my rescue.  I thought that working with visual patterns would be a good segue into working with number patterns.  I put one of these each week into their warm ups.  I choose a pattern by clicking on several until I find one that intrigues me!  Usually I cut and paste into a SmartBoard Notebook page, but this one I just duplicated by drawing the shapes. 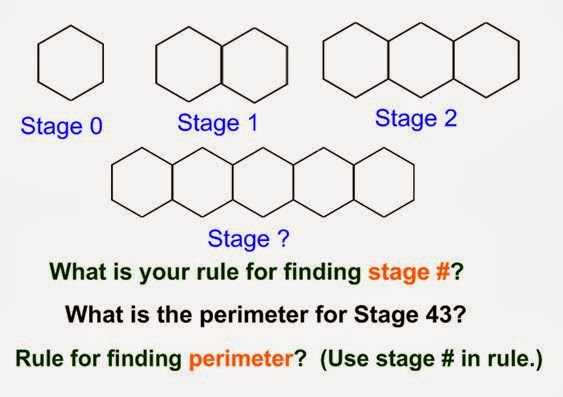 (I love using Stage 0 as the first stage, because it lends so well to "What did we start with at the very beginning?  or at time 0? or before we  worked any hours?")

Having worked with this group, I knew that just figuring out how many figures were in Stage 43 would be challenging for a few, which is why I asked the first question.

I covered up the 2nd two questions with the shade option on Smartboard, and asked them to take out their warm up books and  write their responses to "Stage ?" and the first question.  Some got right to it, some did "scrunchy face".  I told them I expected everyone to have something written down and that Mr. G (student teacher) and I would be around just to peek.

We wandered and peeked, but said nothing.  It was crazy hard.

When we were sure everyone had something down (even if it was just to name "Stage ?") we had kids respond.

Kiddo 1:  I noticed that the Stage number was one less than the number of objects.

Kiddo 3:  (and this one made me practically weep with joy because he is one of my MOST struggling students AND because it is NOT something I noticed!)  I noticed that the Stage number is the same as the number of shared sides.

Kiddo 4:  Oh! I noticed that too, but I thought it was wrong.  (This, too, made me nearly weep for all the opposite reasons, but I told her that when you notice something, you absolutely, positively CANNOT be wrong because it is what YOU noticed!)

Next, I pulled the shade down a bit and asked them to find the perimeter for "Stage 0 - Stage ?".

Which was impossibly hard because I noticed a new way to find the perimeter!  I actually went to the board to write some sort of leading question, when I put my hand over my mouth and slunk away.  My student teacher gave me a puzzled look.  "I am shutting up, " I whispered.

When everyone had something down, I pulled the shade all the way down and asked them to find a rule for what they had just done.  Lots of them had already done that, without being asked!  Whoo hoo!

But still I shut up.
And gave everyone some more think time.
And, wow, was it worth it! 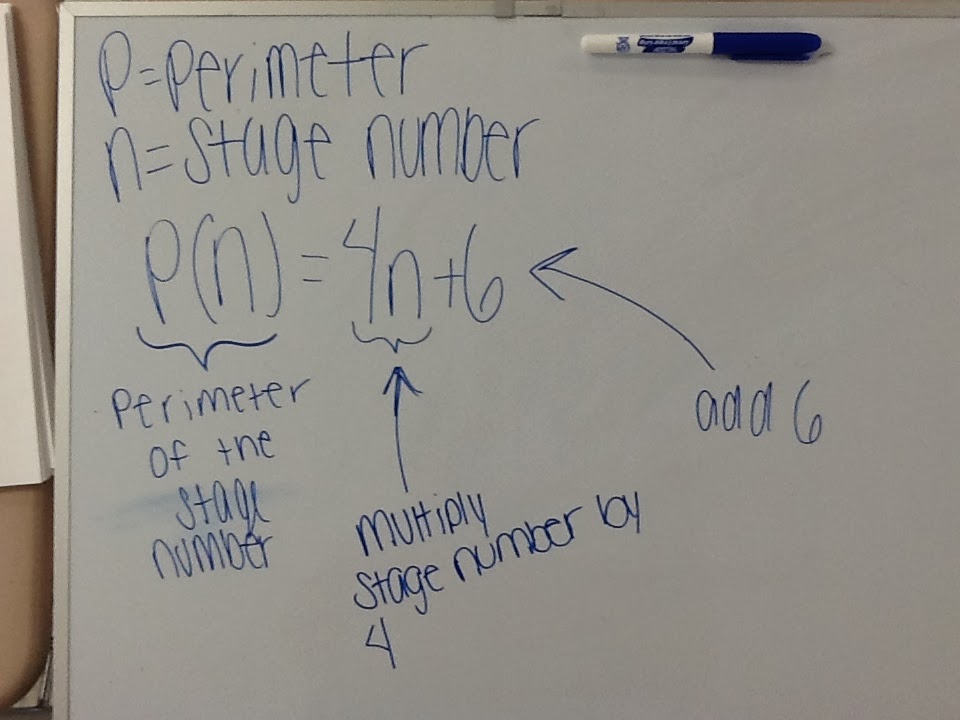 I asked her what the 4 and the 6 represented.  "I don't really know.  I just played around with numbers until it worked for finding the perimeter of every stage." 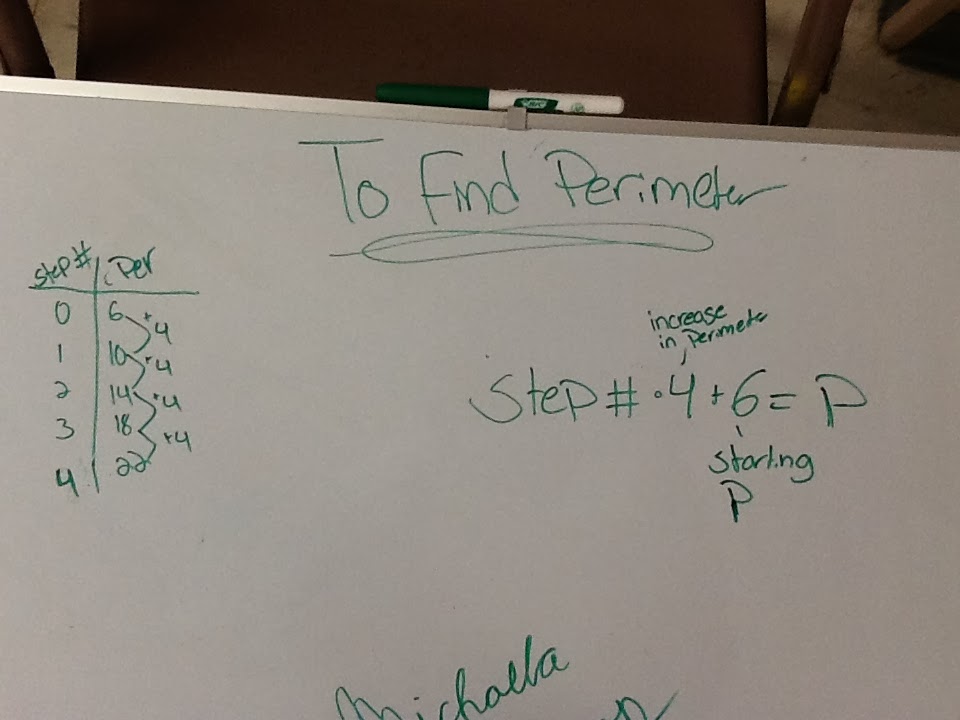 When I asked this young lady to explain what the 4 and the 6 represented she explained as she wrote some more: "Well I noticed that when I made a table of the perimeter, the perimeter changed by 4 each time, and that we began with a perimeter of 6."

At this point we really needed to wrap up the warm up time and I was pretty pleased that everyone had done SOMEthing with this problem.  But THEN, one young man said, "Uh, I did something different."

And it was SO fantastic, that I need to share it with all of you: 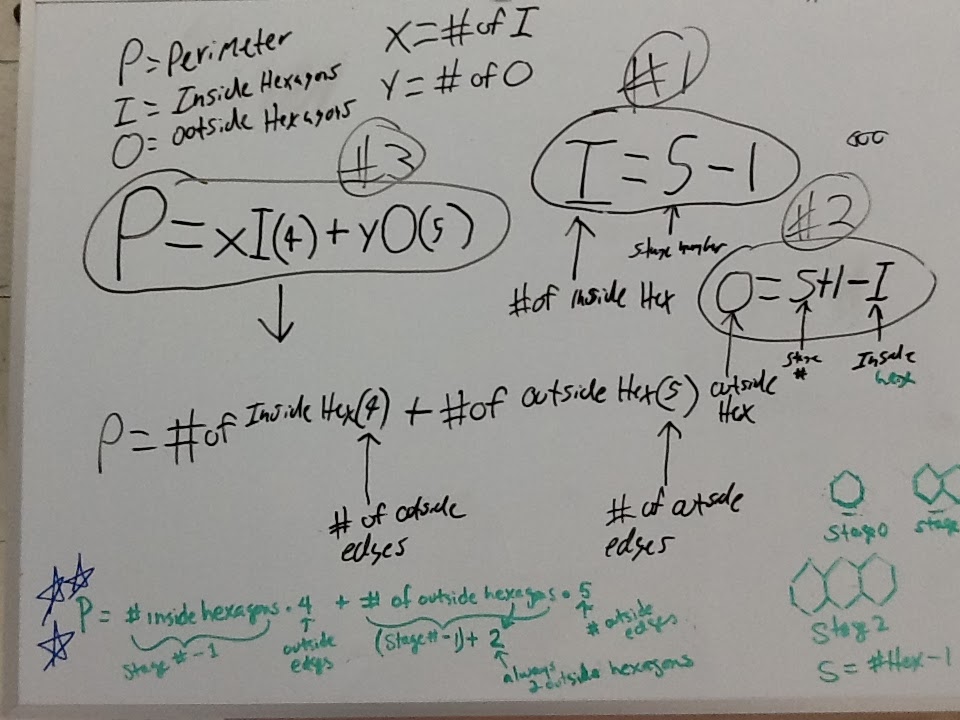 Enlarge this picture and take a REALLY good look at it all.  This kid was on fire!!!!!

The words in green are my handwriting:  I wrote as he explained his thought process to the rest of the class when we asked him questions.
When he was done, I bowed to him!

I wanted to weep.  He saw what I had seen.  And I almost stole his thunder, which would have been SUCH a tragedy.  Instead, he had his moment in the spotlight.  He helped 13 other kids see this pattern in a really unique way, and did it using language that the kids really understood.  It was amazing.

I need to thank all my new "friends" and mentors on MTBoS.  You have never met me.  I have never met you.  And yet you have taught me so much. I am becoming a better teacher, and my students are becoming better learners.

Twitter Math Camp 2014  (Professional Development By Teachers, For Teachers) will be happening just outside of Tulsa OK this July.  Hooray!

You can find out more about this at their website.

I am very excited about this because when I mentioned it to my Principal, she thought it would be a great idea, and that I should invite at least one more math teacher from the building!  Whoo hoo!

But I am hereby admitting outloud, that I am a chicken.  Traveling all that way (yep all the way from the backwaters of southeastern MA) to unfamiliar territory, meeting all these new people whom have been made into demi-gods in my mind, and on top of everything else: being the NEW person.  Oh ugh.  BUT just looking at all the seminars:  egad, I am positively drooling!

So if you read this, and you are thinking of heading out to Jenks, OK this July, contact me via Twitter (@TPalmer207) and let me know.  Maybe my brave-o-meter can move a little more in the right direction!  :)