I have a group of seniors who have not had the opportunity to do the Alg 2 chapter on Exponential Functions.  We were scheduled to do the section on using the compound interest formula, when in my email appeared the most WONDERFUL link to a post from Robert Kaplinsky lessons. 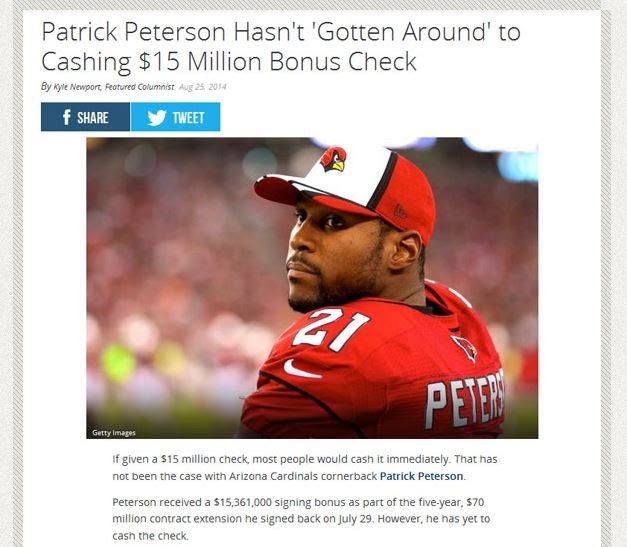 I copied and pasted the above photo from Robert's lesson and projected it onto our SmartBoard.  Using Math Forum's Powerful Problem Solving strategies, we did a Noticing and Wondering about what we read.  From the wonderings, we were able to generate a number of questions: some of which we would need Mr. Peterson's phone number to answer, and some that we could answer ourselves.

The students decided to answer these three questions:
I LOVED the last question because it was an opinion question for which they would have to practice arguing and supporting their positions (can you say MP 3?).  Whoo hoo!

Once they calculated the amount of interest earned in a CD that was compounded daily, one student suggested if Mr. Peterson didn't want it, maybe he could donate it to our school!  As additional practice, we decided to suggest that he donate the interest earned from the day he received his $15 million bonus until today's  date.  Finally, someone suggested we calculate how much it would be if he put his entire salary AND his signing bonus in the bank and donated the interest to us....you know just for the heck of it !!