The first few days of my Geometry are usually my LEAST favorite.  I understand the need to get some basic vocabulary work down, but I just hate it and have been working for years to try to make it go faster and stick harder.

I began with Dan Meyer's Pick a Point.  They loved it and had a good laugh.

My students are frequently Special Ed. students who have issues with notetaking and too much reading.  I have been using Interactive Notebooks with them, which has helped a lot.  This year I did the INB part a little differently.

We started out with a  vocabulary sheet template and this sheet of definitions.  They cut the strips of definitions and match with vocabulary word.  Same with template for angle words and their definitions.  For some of these I drew in pictures in the appropriate slots, and for some I put in the appropriate symbols.  I did not make the pictures / symbols match the definitions they were next to, so they had a lot of cutting and matching.  Then they had to try to fill in the blanks with their partners.


Then I wrote the Chinese character for "man" on the board: 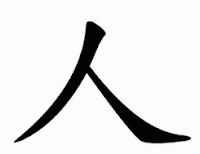 "Any one here know Chinese?  Their language is made of characters, referred to as ideograms.  This means they help you see the "idea" of the word.  Generally they came from pictographs.  This is what the word for man used to look like: "

"Can you see the man?  Look at these:  Let's see if we can figure out what they mean.  Old character is first (more of a picture), then the modern version:" 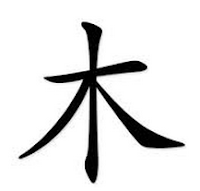 
Finally I told them we were learning a new language we are calling "Geometrese".  It uses "ideograms" as well.  I put this up on the board:

"All great thoughts, but I am wondering why not like this?"

"Because that is an equal sign and it would be too confusing!"

Then we looked at the symbol for perpendicular and tried to decide why they used that.  What was the "idea" in the ideogram.

And finally we looked at the congruent symbol and noticed and wondered about the equal sign that is part of that symbol.  They even asked about the squiggle on top: didn't that mean something?  We got to talk about the different ways the tilde is used in Geometry as opposed to Spanish.

When we were done, one young man looked up and said: "That was the best introduction to a lesson I have ever heard."

God bless him.  As teachers, we get lots of negative feedback ("This is stoooopid!").  We even get lots of neutral feedback (they appear engaged, not drooling).  But we don't always get feedback that tells us we nailed it.

Yesterday was our first day with our students.  Yes, we must have been the last school in the United States to start up!  (Oh wait, I did see some school out west...Seattle?....that went on strike.  So maybe NOT the last!)

I high fived my juniors and it was lovely!  The only word I can think of to describe their reaction is "delighted".  They lit up!  They laughed!  They high fived each other after they entered the room! It was so fun to watch.  Thanks, Glenn Waddell ! 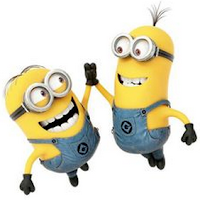 The best word(s) to describe my freshmen when I high fived them?  "Deer in the headlights" comes to mind....They high fived, but were very timid.  Not like the slaps the juniors gave me.  I am interested how long it will take.  Most were still timid "fivers" today!  I wonder how long it will take for them to start giving me a good "slap" high five!? 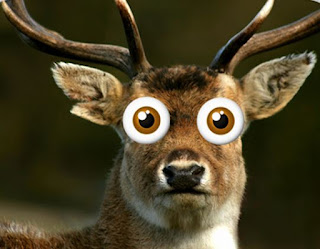 This class contains some of the "underperforming" freshmen.  We did the Four 4's yesterday and I forgot the most basic element:  that you have to use FOUR 4's to make an expression that will equal 1, then FOUR 4's that make an expression that equals 2, etc.  I just let them go at it: "You can only use 4's and any operation to make expressions that will equal the numbers 1 -10."  They were making strings of two 4's and strings of eight 4's and everything in between.  Duh.....

We worked on just the number 1 for a few minutes. First they worked on their individual white boards and right away I could see who didn't understand the instructions.  I asked someone who had an answer to put theirs on the board and explain how it came out to the number 1.

"Oh! I did it differently!"
(Be still my heart)

"Would you mind showing us what YOU did?"  Up to one of the white boards she went.

"Oh! I have another!" I heard from the back.
"Come on down!" I encouraged.

This young man did the order of operations incorrectly.  Someone asked didn't this have to happen before that?

"Could you explain what you are asking a little more?"

"I think he wanted us to add up all those 4's and then divide that answer by 4."  And then he turned to the kid in question and asked: "Is that right?"

"So how could you get us to think like you?  Is there some way to make us do what you did FIRST?"

I let them all keep working.  As they came up with new expressions for various values, they added it to the poster paper.  I encouraged multiple representations, and they were happy to go at it.

Finally one kid looked up and said: "Hey, we can just make building blocks and we could make any number we want!"

The others all looked at him like he had 5 heads.

"Could you explain that?  Maybe show us what you are thinking about?"

"See:  this much equals 2 (he writes 2 above the appropriate expression) and this is 3 (does same and puts + sign between them)."

"OOOOOOOOOOH!"  And then it was bedlam.  And it was wonderful.

Posted by Tina Palmer at 9:31 PM No comments:

In the spirit of MTBoS, I wanted to share this game I made up a bunch of years back and forgot about because I stopped teaching the class I made it for.

We don't start classes til after Labor Day (I know, I know: we will be in school until June 30th if we have a winter like last year's!!).  I am in my room today and bumped into this game.  I think I will use it on Day 1 with my PreCal cherubs, just to make sure they are up to snuff on exponents of all kinds.

I made FOUR of these decks of cards (yep, 52 x 4) by hand because the printer I had available at the time could not print card stock.

I couldn't get all the cards in one shot, so I did 2 pix: 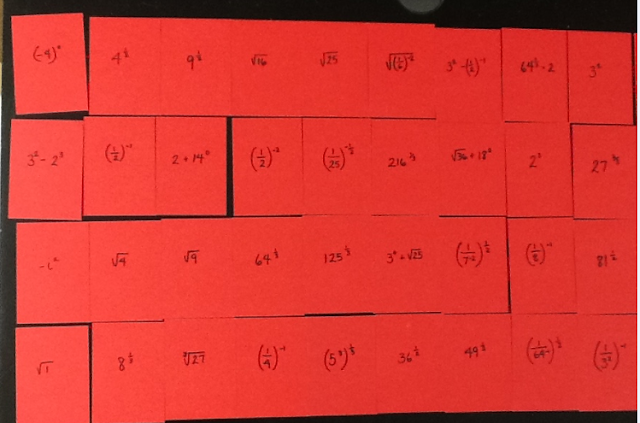 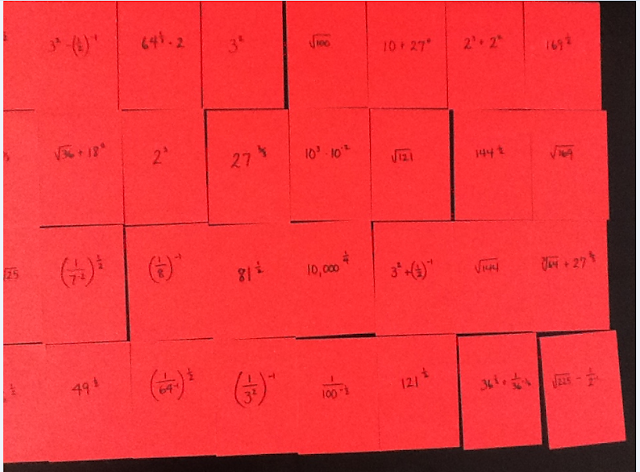 For those of you who may not have played Spoons recently:  You put one less spoon in the middle than you have players.  The point of the game is to collect 4 cards of the same value (four 2's or four 7's). The deck is shuffled and each player gets 4 cards (which they don't show to anyone).  The rest of the deck is placed face down.

The dealer picks up the top card, decides to keep it or slide it to the right hand player.  If he decides to keep it, then he must discard something from his hand and slide it to right hand player.  A player can only ever have 4 cards in his hand.  Player to his right decides to take this card or pass it to HIS right hand neighbor. This whole process keeps going: dealer grabbing card, making decision, passing; next player looking at this card, deciding, passing on a card.  The last person in the group puts his discarded card into a pile. If no one has collected 4 of a kind before the last card is played, the discard pile is shuffled and play resumes.

AS SOON as someone gets 4 of a kind they grab for a spoon.  At this point everyone else has to get one too.  The person who doesn't get a spoon is out of the game.  Players remove one spoon, shuffle all cards and get ready for round two.  Play continues until the last round of two players and one spoon which is the CHAMPIONSHIP round.

Feel free to make a print copy of these cards.  I am just too lazy since I already have these!  And you can double check my math....  :)