I am following up on my shout for help.  My Pre-Cal students had been working like crazy people as we tried to finish up the curriculum and they came through with flying colors.  As a result, I wanted to make their final exam time a bit more fun, but still really educational.

I put the call out to the MTBoS and as usual they had some grand ideas!  I also chatted with the other PreCal teacher to see what she thought of this idea of creating a game or activity.  We both agreed that our students frequently come to us with areas of weaknesses.  We decided that we would focus this game idea on those areas that needed the most remediation throughout the year.


The kids did a great job!  I shared the handout in my previous post.  Here is how they were scored.

And here they are playing the games. 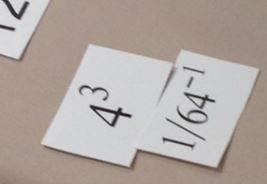 I gave them one 80 minute class to do most of the creating.  The second 90 minute class to "test drive" it in their own group and get the rules written up.  Before the class was over, they had to hand their instructions to another group who gave them feedback on the clarity of the rules/instructions.  Edits were made.

On the day of the exam we had 90 minutes.  That meant time to play 2 of 3 games, time for each group to get feedback from the others, and then 25-30 mins for them to type up and submit their reflections.  Worked out pretty well!

Things they all commented on:


This was a really special class.  They worked so hard all year and even in the end, they put effort into creating AND playing the games.  I am going to miss them SO much!

Posted by Tina Palmer at 8:54 PM No comments:

This year I have an option of giving a paper and pencil final exam, or using 2 days plus the 90 minute exam window to have them do something else.  They are SUCH great kids and have worked SO hard this year, I am opting for the latter.

A few weeks ago, I tweeted out a call for what to do and got some fabulous suggestions:

The result is I am going to sort of do a combination of these.  They have seen several activity builders, they have done card sorts, but they have not yet seen WODB.  I will show them Mary's site on WODB and explain how it works.

Then I will give them this paper and let them go at it.

The topics I am thinking of all have to do with skills that we had to spend more time on than I feel we should have, thus we didn't get as far as we should have in the curriculum:

For any of you who read this, I would love some feedback.  Can we get this done in 2 eighty minute classes and then play them AND reflect on them in a 90 minute block?  (I am expecting that they will assign themselves homework if necessary.)  Can you think of other areas that you find yourself having to review again and again (that they SHOULD have dealt with in Algebra 2?).

Thank you to all who take a moment to read and comment!
Posted by Tina Palmer at 12:53 PM No comments:

This article was tweeted out by @MrVaudrey.  Go read it before you do anything else.

There is nothing more I can add except that I second Jim Doherty's (@mrdardy) thought:

Jim became involved in the Math Twitter Blogosphere a few years ago, midway in his teaching career.  I met Jim at Twitter Math Camp, where I believe we were both first timers, and coincidentally, had both been teaching for 27 years (I took an 8 year break to raise my tribe of boys, and tutored during those years, so I am not counting them!)

I have learned SO much from becoming part of this on line community.  It has changed the way I teach, changed the way I question students, and changed the way I think about learning.  I have always enjoyed trying something new, but it was exhausting trying to do this for the 5 DIFFERENT courses I was teaching for most of my career (I'm down to 4 different courses this year: Yippee!).

The MTBoS is the most wonderful group of professionals ever to grace the internet.  They share resources as well as ideas.  They toss out thought provoking tweets.  They write insightful blog posts.  They organize professional development (go look up Twitter Math Camp) and charge nothing for it. They hand out virtual hugs.  They find the best places for cupcakes!

I will retire in 6 years.  But I want to make the most of the time I have left in the classroom. And so, like Jim,