A long story made short:  I was blessed with four brand new standing work stations.

They are tempered class tops (yeah, makes me a little bit nervous, but we shall see) and they look like this:

They take up a bit more space than a normal desk, but they have this cool storage space!  We noticed right away, that if two kids collaborating on something, they fit ok,  We also noticed that white board markers rub right off of this surface.

On first day that these were in my room, I was introducing solving systems of linear equations.  I have been working and working to try to "create headaches", as Dan Meyer suggests, so this is how it started:

"I may have mentioned to you all that my sister-in-law lives on a farm.  Well, she raises lots of different animals, but they are all pets!  So here is a crazy puzzle from my crazy sister-in-law." (It is actually straight from a Kuta worksheet, as is the next one.) 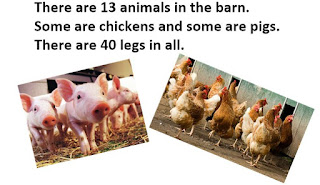 Students did a lot of guessing and checking and with some prompting started to keep track of their guesses.  This helped them do smarter, more organized guessing.

Since the entire sophomore class had gone on a field trip that week, I put this one up next: 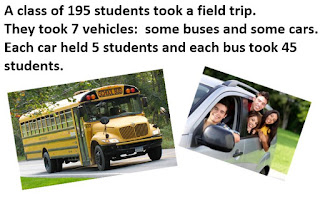 It took less time for most of them to make an organized list.  I found fewer making just wild guesses, although some still were.  Some made pictures of buses and cars, labeling how many kids were in each and keeping track of the total.  I made a big deal of this method.

Other students began creating mathematical models using variables.  I made a big deal of this method.

After the field trip problem, I put up Mary Bourassa's Tim Horton donut and coffee problem (since we live in the land of Dunkin Donuts, I had to explain how big Timmy's is in other parts of the country and in Canada):


I caught one kid doodling on the new desk! :) 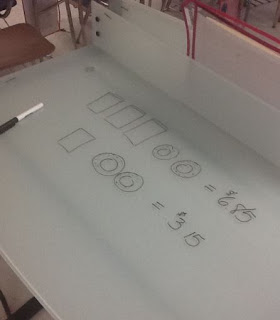 I called the other kids over to see what he had done.  One girl GRABBED his pen and did this,

exclaiming: "OH! I know how much a cup of coffee is!"
and here is the rest of what she did. 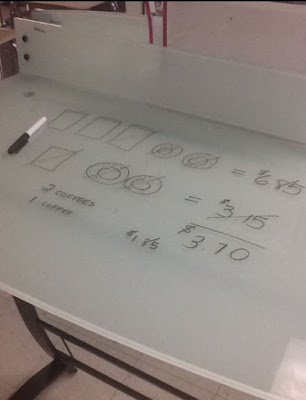 And finally one of the students said that he noticed one cup of coffee and 2 donuts cost $3.15, so you could just take that away from the $6.85, leaving the price of 2 cups of coffee.

All this brilliance because of new desks to draw on!  :)

P.S.  A couple of days passed between the start and finish of this post (Son #2 got married), and TOTALLY forgot how we finished this up (until I got a reply to an email I sent off to Max Ray-Riek on the day it all happened)!

We finished by using the mathematical models (the ones with variables) that other students had used. We typed these models into Desmos (using x and y....if you use c and d for coffee and donuts it asks if you want sliders) and observed that the two lines intersected.  We clicked on that point of intersection and....Minds. Blown. : the very numbers they had discovered for the cost of a cup of coffee and the cost of a donut!

For those with SmartBoards, here is a link to the Smart Notebook file.

A Break from Teaching

Son #2 was married this weekend to a lovely lady from the British Isles.  We are so happy for them both. 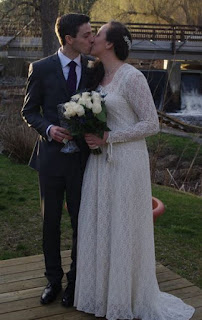 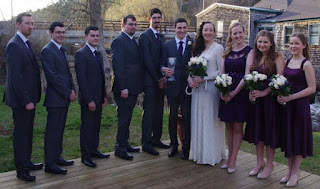 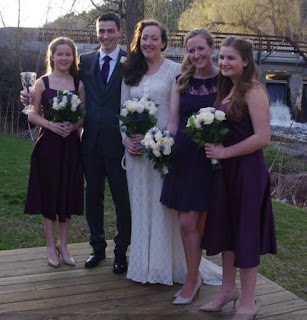 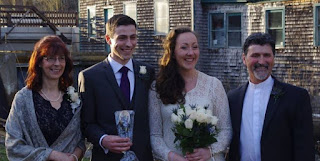 Posted by Tina Palmer at 5:52 PM No comments: