Intro to Segment Addition Postulate Morphed into SO Much More!

My Geometry students are a really mixed bag of abilities.  Just shy of half of them are on IEPs and/or 504s.  It makes it challenging to be able to figure out how to get the material introduced in ways that are accessible for all learners, including those who are not native English speakers.

Today we had only 15 minutes at the end of class to introduce the Segment Addition Postulate.  I put this on the board:

(Max and Maxine live on the same street.)
My friend Max walked from his  house some distance to visit his friend Maxine.
Meanwhile, Maxine decided to walk out to meet him along the way.

Then I asked a student to go up to the board and draw how far Max walked.

"How far should I draw?"
"Until you think that is how far Max walked."

It was funny to watch her add a little bit more and then a little bit more. Why?  Because she would turn to me with a questioning look and I would say, "OK.  Is he done walking now? Finally she just said "Yes, he's done," and I asked a second student to go show how far Maxine walked.

I am grateful when student number 2 drew the other segment, Maxine walked all the way to where Max seemed to have stopped.  I wasn't sure how I would deal with that except to say, "Is she done walking yet? Why/why not?"

I asked a third student to put a point where the two met.

We called it P for "Perfect" (said with an English accent....I did that once and they now all mimic me! Whenever someone does something great they all say in unison: "Perfect!" with the appropriate English accent.)

Here is what we had so far: 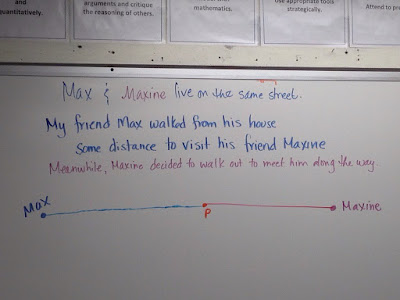 Next I asked them to notice things in the story that they could say with ABSOLUTE CERTITUDE.  One of the notices was that P was the midpoint.  I had to intervene here and ask the student to prove it.

Someone grabbed the yardstick and measured the segments.  To make it more "real" we decided to scale it: 1in = 1 yd. 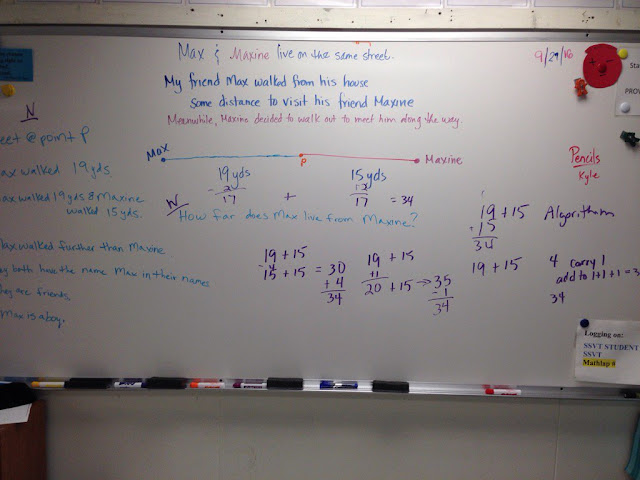 Finally I asked them to come up with some questions we would be able to answer with ABSOLUTE CERTITUDE.  These questions ranged from "Are they friends?"  (Yes b/c it says "his friend Maxine") to the one I had hoped for:  "How far do they live from each other?"

THIS question led to a spontaneous Number Talk.  I had not had an opportunity to do Number Talks with this group of students yet.  It was SO cool.  These strategies ranged from "I did the algorithm" to "I took 4 away from the 19 so that it became 15 + 15 = 30, and then added the 4 back in to get 34."

I particularly loved the very last one. It was SO cool, I made the kids stay quietly in their seats even though the bell was ringing b/c THIS young man noticed that if Max had waited and not walked the extra 2 yards, Maxine would have walked an extra 2 yards which means they each  would have walked 17 yards and he knew that 17 doubled was 34.