Some Days I Am Bad at This Job

Yesterday I had only 3 days left with my sophomores before the state math test.  I had them today, then they go to shop for 5 days, then I see them for a single day and then, bam, they take this high stakes test, where THEY will be evaluated and I will be evaluated, too.

One young man (one of my sophomores) came back after school to work on solving systems of linear equations word problems.  Also happening in my room at that moment, was a test prep group.  They are a VERY needy, not always so motivated, group who show up faithfully because their teachers and parents make them.  It has been slightly torturous to get them to do anything, so we did trashketball.  It was slightly noisy, to say the least.

What on earth was I thinking:  I honestly was cycling through helping everyone, including this poor dear who had NO clue about solving systems of equations by elimination. This was the skill he was trying to practice.... with word problems.

And I kept trying to get him to see how to eliminate one of the variables.

And he just had NO idea what I was trying to get him to do.

And I was frustrated but trying not to show it.

And he was feeling more stupid by the moment.

Finally I acknowledged that I thought maybe we needed a quieter time together to do this.  He agreed and we parted ways with a promise to get together on Wednesday afternoon.

I beat myself up all the way home.  "Honestly, Tina, you KNOW better.  You could have done this a hundred different ways. What were you thinking???"

Fast forward to this afternoon: a different young man arrived in study hall to do the SAME thing: work on solving systems word problems. ( NOTE: I am working through an on line course with the Math Forum called "Nurturing Powerful Problem Solvers".  Figured I had better start doing a better job!)

I grabbed a couple of very simple word problems off Kuta and asked him how he would figure out how many fancy shirts and how many plain shirts this young lady purchased.  He is adept at noticing and wondering, so it was not hard to get the conversation going.

"How would you even get started on this crazy problem?" I asked.

"Guess and check I think."

"Excellent. Go at it."   So he guessed 4 fancy and 3 plain.  He explained that he did that because there were 7 shirts.  I asked him to figure out how much she spent.  He did the correct multiplication, and before even writing anything down, said it would be too much.  He changed that amount around: 3 fancy, 4 plain, and saw that he was moving in the right direction.

At this point, I intervened.  "Let's just organize what you have just told me."  I made some labels on a table and had him fill in what he had just been doing with his calculator and his brain. 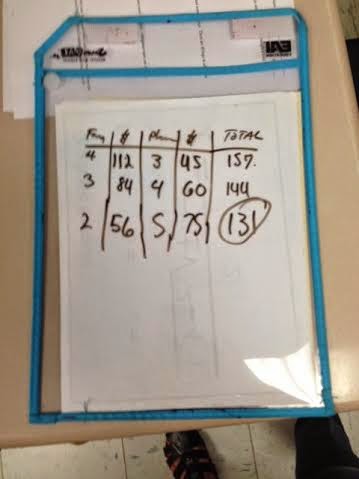 I wondered how he chose his values.  "I just started with 4 fancy, then knew I had to choose 3 plain to keep it at 7 shirts.  That came out to be too much money, so I figured I should choose fewer of the expensive ones.  When I went down one Fancy, I had to go up one on Plain.  That was still too much money, but I was going in right direction.  I went down one more Fancy, so had to be at 5 Plain.  That was just the right amount of money!"

He did several more problems:


He seemed really comfortable with this method,  so I handed him the crazy quiz problem I had created for our class the week we had been working on this skill (he had been out with a concussion).  I was really worried because it is all made up words.  He read it carefully.  He read it again.

"You ok with the silly words?" I asked.

"Yep."   And he proceeded to produce this work of art: 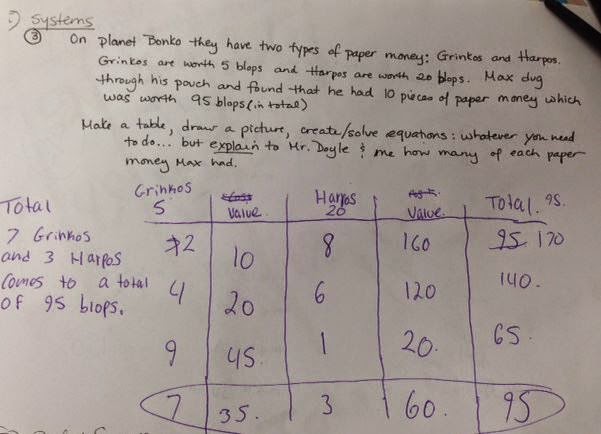 Please, Dear God, let me have another chance with the FIRST young man who came for help. Dear Student:  I am sorry.  I was a horrible teacher yesterday.  I did you a total disservice, but I am prepared to try to do better when you come see me again.