#Star of the Week!

Meg Craig (@mathymeg07) is one of those people who make your heart sing.  I have learned so much from her and she shares her materials, thought, ideas, and encouragement so freely.

Last summer she announced that she would be perusing the Math Twitter Blogosphere and Twitter to find teachers who are doing cool things.  This week she chose several, and I got to be one!  If you click on the #Star of the Week button, it will take you to Meg's post.

Thanks for your kind words.  More importantly, thank you for the encouragement you ALWAYS give and for the humor that goes with it!  We love you, Meg!

Yours Truly,
Tina and the rest of the MTBoS !!
Posted by Tina Palmer at 9:32 PM 1 comment:

Getting Past Those Hurdles!

Algebra 1 and introduction to functions:  I have never liked how I did this before, so I scrapped everything and borrowed some stuff I had done when I introduced polygons (developing definitions).

The link to the slides is here, but let me explain what I did at the end that seemed to make a huge difference in my students' ability to interpret a graph of a function.  They can easily tell me this is a function (because I always start this unit by doing Hiker on the TI84 which uses the motion detector and they have to recreate some graphs I have created).

I started by showing this graph and asked them to share out some notices. 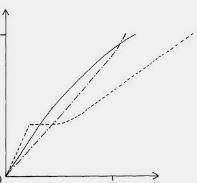 Then instead of doing wonders, I asked them to sit quietly for a moment and come up with a plausible story for what was going on in this graph.  I let them share out stories, and they had to be able to account for what was going on in the various parts of the graph.  We recorded a bunch of plausible stories.  Some of the stories included manufactured goods, car races, people walking, etc.

After we were done, I tapped the screen and gave them one additional piece of information: 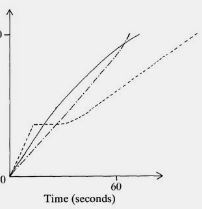 We went through our stories and starred the ones that could still be plausible now that we had this additional information, and talked about how this domain or input information made some stories work and some not.  We went through the remaining stories to be sure the various parts of the graph still made sense.

Then I gave them one more bit of information: 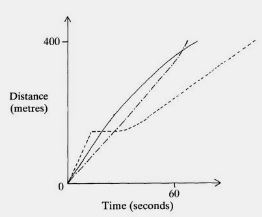 We went through our stories and starred the ones that made the cut, given this new information.  We were left  with just 2 or 3, and it was getting hard to keep talking about the Solid Line, Dotted line, and Dashed/Dotted Line.  I revealed one more bit: 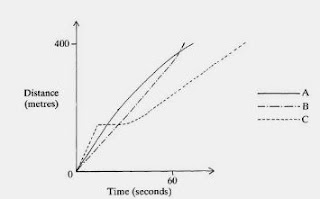 Ah, yes. SO much easier when we are given a key!!  We went through the various stories left, accounting for that horizontal piece and the place where A and B cross.  They still were voting for a car race, a trio of people walking, and a running race.

I asked what this graph was still missing.  It took them WAY longer than I expected, but finally one of my most quiet students threw his hand in the air and shouted:  "A TITLE !"

In triumph we showed this slide and there was a chorus of "OH!"s and some fist pumping: 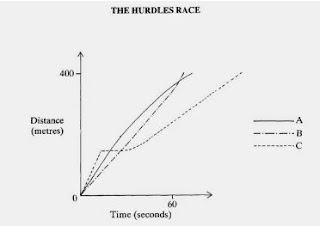 Then I asked them to sit and write the story of this graph,  And they were spectacular.  We had spent so much time already thinking about causes and effects, they were able to do this SO much better than ever before.

But ONE of my Algebra 1 classes (small, mostly guys) kept saying NO WAY could any one run 400 meters in 60 seconds.  They kept thinking about the length of a football field and just refused to believe that these numbers made sense.  I had to put them on hold so we could finish the writing.  I even told them if they had to change the 60 seconds to another number, I was okay with that, as long as it got incorporated into the story.

Today, I grabbed them all as they came into class and told them to drop their bags we were going outside.  We walked the track and I told them that this track is 440 yards (roughly equivalent to 400 meters).  As we walked I asked them to take out their phones and google what the world record is for the mile.  (A mile is four laps around this track.)  What?  Under 4 minutes?  So about how long to do one lap?  They were amazed.

"On Friday, I will time anyone who wants to run one lap on this track.  How many of you volunteers think you can get close to 60 seconds?"

When I got home today, I told Hubby about this.  He suggested I let them tell me how many seconds they thought they could do it in and then I give them a range that they could be within that guess.

So a will be their target time, the number of seconds they think they can run the lap.  And b will be the range I will give them ("You know, you have to be within plus or minus this many seconds and you can still win that candy bar.")

I will update after we get through with this, but I am beyond excited thinking how I can introduce absolute value equations, all because I wanted to introduce functions differently!
Posted by Tina Palmer at 8:27 PM 3 comments: