We Have the Power!

Sometime during the last school year, I saw people tweeting about a book called Powerful Problem Solving, written by Math Forum's Max Ray and other members of that fabulous team.  I finally found time to read some of it during the late spring, then the end of the school year happened, and hubbie got sick, and....well, you know how it is.  On my flight to Twitter Math Camp (TMC14), I finally found the time to finish the book! 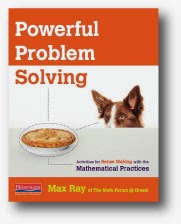 At some point, after one of the evening meals at the hotel, a bunch of us were talking and I heard someone say something to a young man named Max who was part of the group.  I listened some more and finally realized this was THE Max.  We began a conversation about the strategies he explains in his book:

"But, you obviously are talking to elementary and middle school teachers.  I am sure these will work for high school aged kids, because without even knowing where it came from, I have been using Noticing and Wondering a bunch of times this year." Max agreed and said they had been wanting to get some video of high school teachers using these strategies and could he come to my school?

In preparation for his coming, I took Math Forum's online course "Developing Powerful Problem Solvers" . While participating, I came across some amazing videos:  one of which I used with the class of sophomores that Max would be coming to see. It is called Charlie's Gumballs.  Try it out! 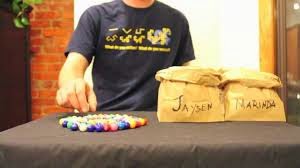 My students were very excited to hear that "my friend Max" (of Charlie's Gumballs) would be coming to visit them.  Max shared "Angela's Grapes".  We had visitors watching Max do his amazing Max thing.  These observers were amazed at how engaged the students stayed throughout the whole thing.

So what did I notice throughout this experience?

And what do I wonder?

More USEFUL learning took place in the strategies, in the teamwork, in the communication, and in the revision of thought those students used in those 45 - 50 minutes, than has taken place in hours and hours of some of the other lessons in my classroom throughout the years as we rush to be ready for the test that is used to measure both them as students and me as a teacher.