I live in Southeastern Massachusetts, about 45 minutes south of Boston.  For those of you who live in New England this winter, you know where I am going with this.  For those who DON'T live in New England, let's just say that we haven't had a lot of school recently.  And as I write, it has started to snow (AGAIN). This one is supposed to be a blizzard (wind gusts at near hurricane strength) and bless us with another foot of snow!

This is hubby chopping down the 6 ft piles at the end of the driveway in preparation for today's dumping!!  You can't see it, but he moved 3 ft of snow back into the yard. 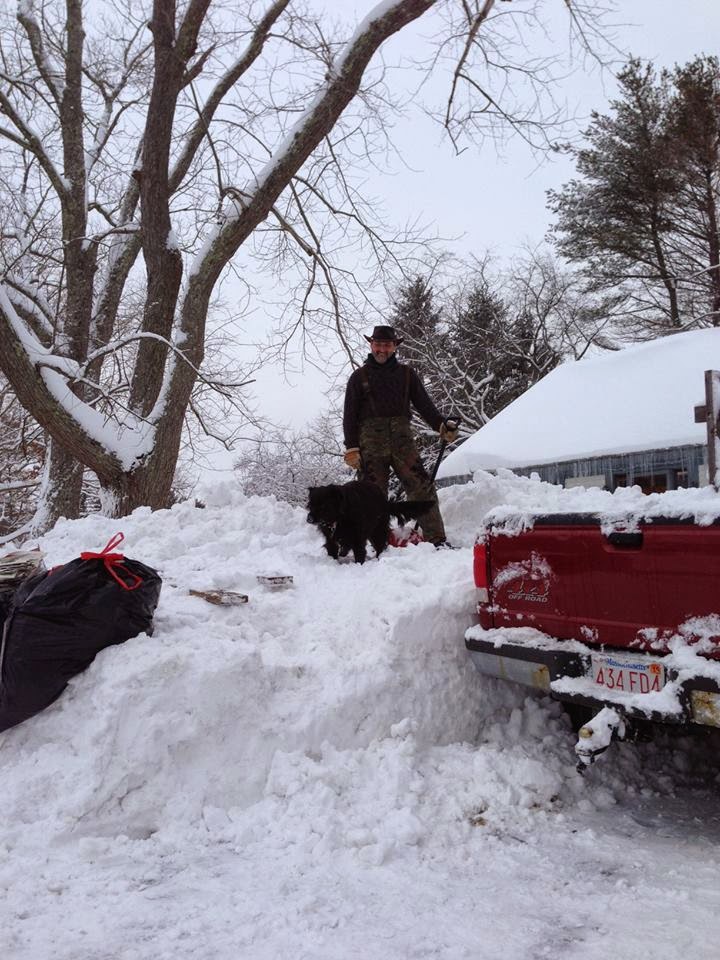 I teach at a vocational school, which means we see our students from two grades for one week, then they go to shop and we see the other two grades.  That in and of itself is pretty disruptive, especially if there is a holiday or vacation involved.

These snow storms have created 2 and 3 day teaching cycles.  I have been TRYING to teach trig to my geometry class.  The first time I had just 3 days (not consecutive, btw) and was trying to lead them into trig via similar figures.  Then off they went to shop.  I got them back after yet another storm and got to have them for 3 whole days in a row!  Not really enough to get on a roll!

On Jan. 30th I sent them home with a bunch of right triangles with marked angles.  Had them just name the sides: opp, adj, hyp.  I finally got to see them again on Wed. Feb. 11.  Showed them this picture: 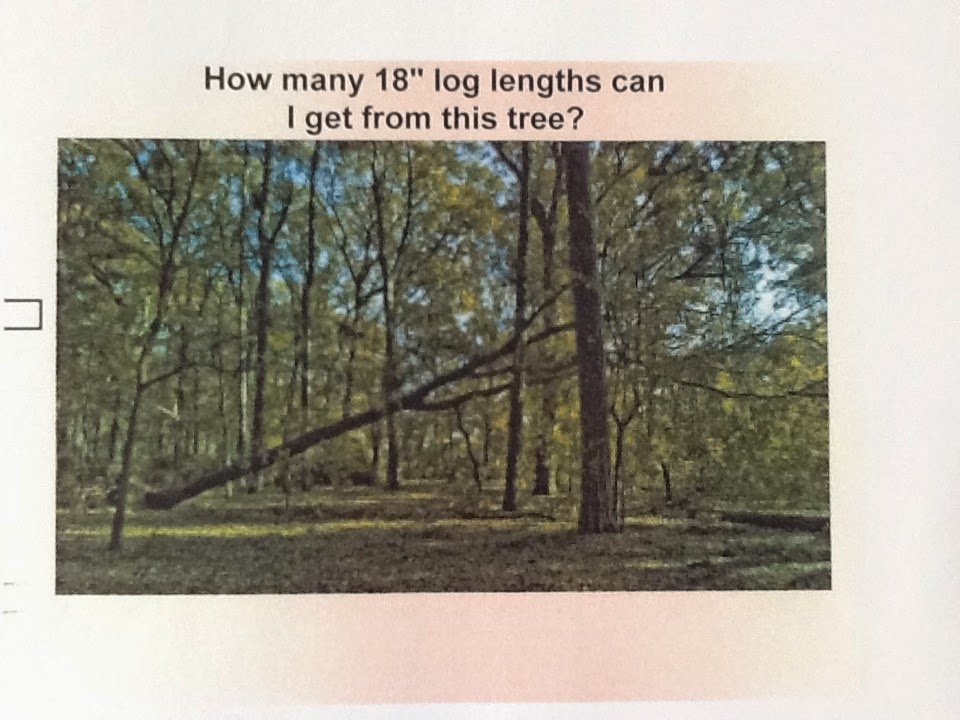 I had them talk to each other about how they might be able to solve this problem, had them notice and wonder and discuss the types of information they might need to get to an answer.

My aide is wonderful and plays along.  He chimed in with wondering how I would measure the vertical tree:  did I have tree climbing equipment?  (Kids wanted to use Pythagoras to help us find length of downed tree).  This led us to the fact that sometimes we can only measure one side, but there is a work around!
I was thrilled that one student noticed a "smaller triangle of trees" and could they use similar triangles.  Hooray!

We put the problem on hold after we measured the angle that the tree makes with the ground.

We dragged out the numerous triangles we had cut out and measured last cycle.  We noticed that the opposite side divided by the adjacent side of every right triangle with a 70 angle, no matter how big or small the triangle, those two sides always came out to be the same decimal number (or very close to it!).

We told them the name for this special ratio was the tangent ratio.  We handed out this LOVELY trig table (Thank you Punchline!): 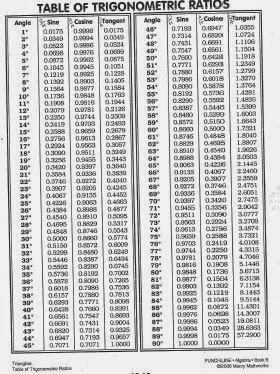 Then we tested it against some different triangles with a variety of angles and sizes of triangles: some kids using calculators to figure out the sine of a given angle, and kids with those triangles testing their opposite side divided by their hypotenuse.  I am trying very hard to hammer home the idea that the cos(67) is a relationship between 2 numbers (sides) and creates a VERY different number than the number 67.

By Friday we were solving for sides and angles of triangles.  For those students who were messing up and multiply or dividing by 67 (instead of cos(67) ), I took away their calculators and had them set up the problem by looking up the value of cos(67) on their tables.  Once all their problems were set up correctly, I gave them back their calculators!

By the end of Friday's class, I gave kids who were doing fine, one of these word problems.  (Originally these were part of a worksheet that had the pictures right with the problems.....I HATE that!)  Some of the problems I modified to make them more interesting:  Used lots of superhero/monster names, changed units of measure (from meters to cm), etc. 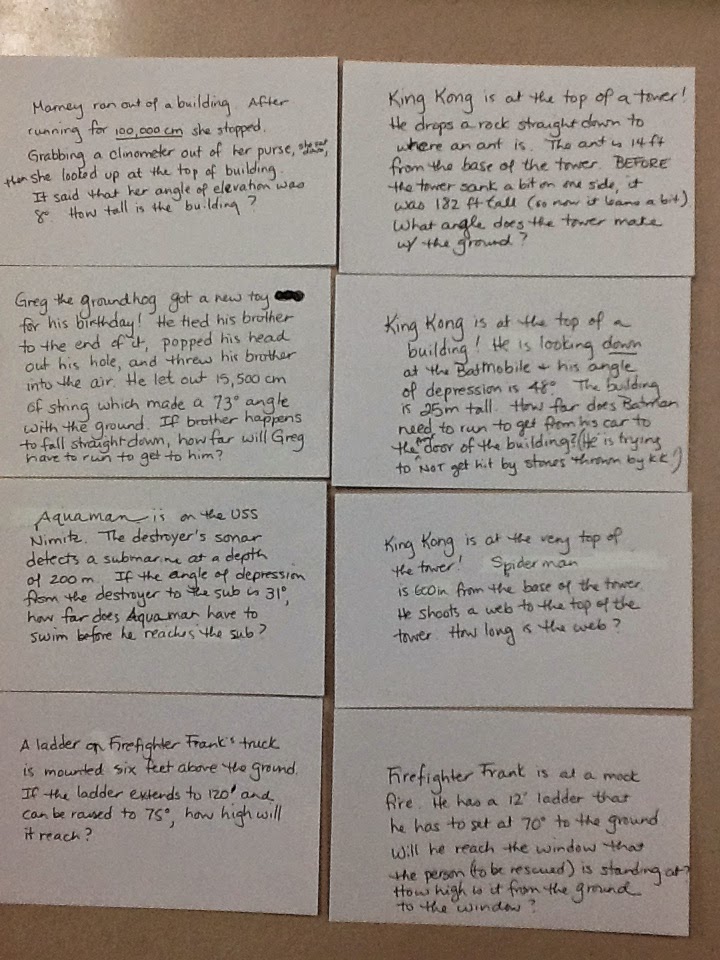 We gave each partnership a large whiteboard and asked them to sketch the scene of what they were reading, including angles, side lengths, units of measure etc.  When they were done, they had to go to the back table and see if they could find a picture that matched theirs (these were the illustrations that had gone with the original word problems). 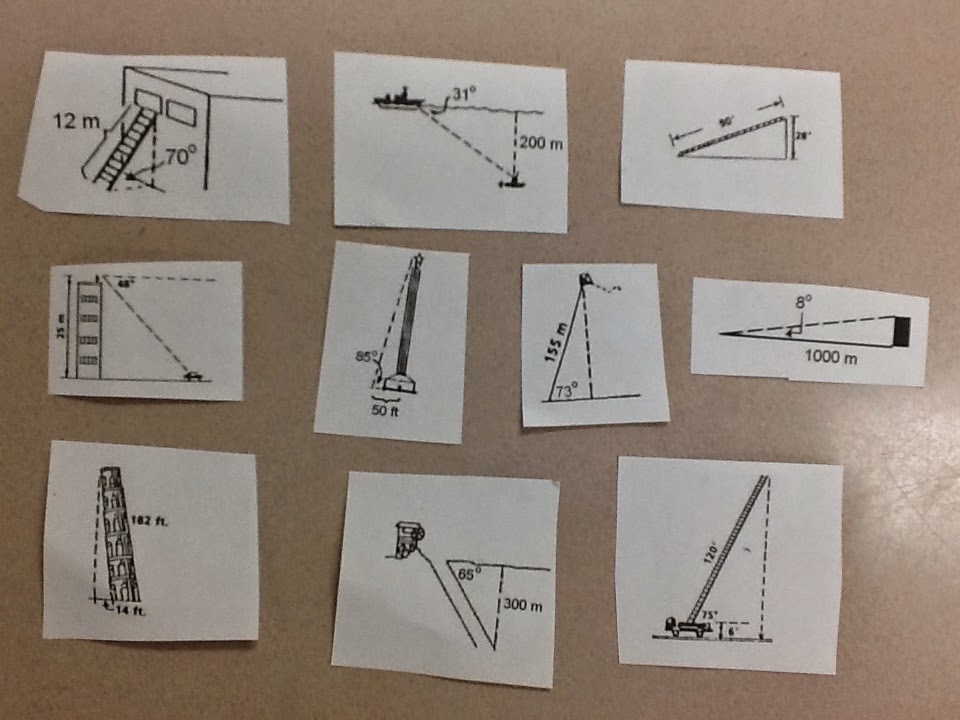 Once they verified that they had drawn and labeled their picture correctly, they had to go back, decide what trig function to use to solve and get a solution.

What I liked about this activity:

I am hoping that when I see them again (on the Mar. 2 bc of Feb vacation and then they are in shop for a cycle!), we can wrap this all up by figuring out how many logs we can get out of that tree!!

For now, I am in a panic on how to get the rest of the Geometry curriculum in.  We all know that a day in Feb and a day at the very end of June are NOT congruent. Looking at finishing school on the 25th June right now, but winter ain't over yet!

P.S.  Here are the links to the pictures and to the word problems.
Posted by Tina Palmer at 5:13 PM No comments: