Last year on Patriots Day, my niece, at the last minute, agreed to run the Boston Marathon to help pace a friend of hers.  I had no idea she was even IN Boston that day. The month before she had run the LA Marathon and I thought she was still in CA working.

But, no, she had come home to Dorchester to watch the Marathon, and, in the end, to run it again as she had the year before.  She and her friend had just crossed the finish line and were only a block or so away when the bombs went off.  She and friend are fine physically, but no one who was there or who had loved ones there will ever be quite the same. 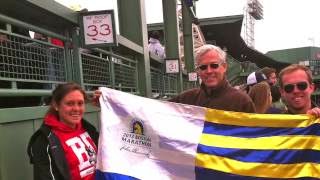 Please take a moment to watch this and, if you feel moved to, share it with others.

Posted by Tina Palmer at 9:25 PM No comments:

I have spent so much time in the Math TwitterBlogosphere this year that some people are wondering about my sanity.  I keep sending links to my staff, sharing cool ideas, and in general trying to get people to see what an AMAZING community of mathies is out there!

Most Tuesday evenings I can be found bouncing between computer and getting my stuff together to be ready for school the next morning.  The Global Math Department has some pretty fantastic PD nearly every Tuesday.  This past Tuesday William McCallum shared what he was doing with the Illustrative Mathematics Project.  As I buzzed between closet and kitchen, I heard (and read....the chat box is often just as informative as the presenter!) some thought provoking ideas.

Can't remember what Bill was talking about, but he showed the Stained Glass Window task, and since I had JUST been doing perimeter and area of compound shapes, it really caught my eye.  Off to the website, I went.  I copied and pasted (and credited), stuck it in a Word doc and voila: 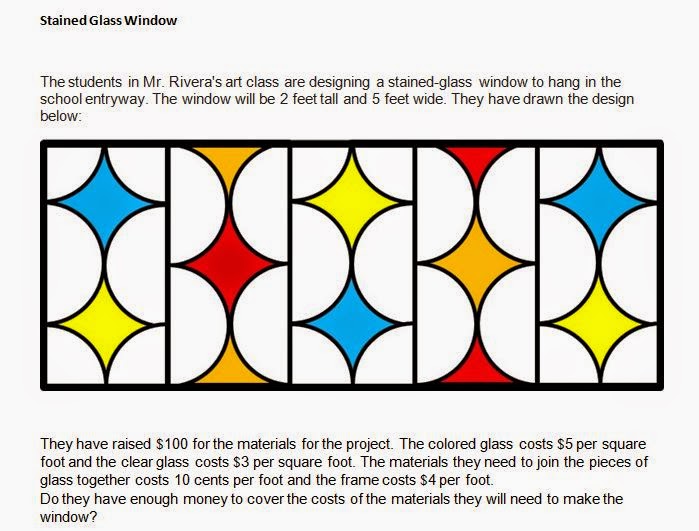 Sent it off to my staff,  many of whom are doing the same unit as I am, so I thought maybe it would catch their interest.

TA DA!  Sound the horns!  Here is the email response from a pair of co-teachers.

Awesome!  Our period one class loved this problem - and they don't love anything!  They're usually so dull and boring!

When I spoke to one of the teachers later she said that her co-teacher talked her into trying it with the kids.  Since it was a last minute idea, they had no real plan, and figured they would just toss it out there and see what happened.  If it started to bomb, they would do some interventions.

"So Ms. D and I sat in the back working out the answers ourselves.  The kids worked in pairs and were ALL working, even your buddy N !  As Ms. D and I got closer to an answer the kids kept saying, 'No!  Don't tell us, we want to figure it our ourselves!'  It was so AWESOME!"

I managed to restrain myself from saying "Right?  This is what I have been trying to say all along!"  So instead I did my little happy dance and grinned the rest of the way back to my room.  Then I sent her my plans for this past week in case she wanted to try any. 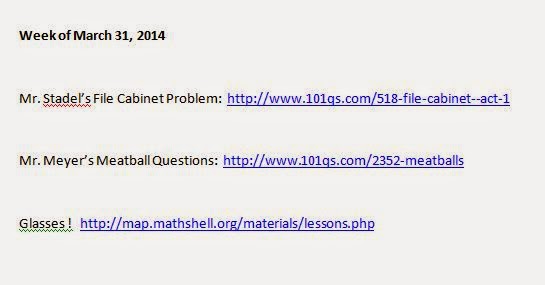 Posted by Tina Palmer at 8:36 PM No comments: