My junior class study hall (made up of kids who are not math students of mine), are a bit of an active bunch.  In order to get them to concentrate on actually getting homework done, I have bribed them with games on Fridays.


Last Friday, I brought out SET.  None of them had played this game before, and I have only played a few times (I know, I know: and I call myself a Math teacherA??).  Anyway, several of them really got into it once I played a few rounds with them, and because they were getting excited and arguing over whether something was a set or not, others began to come and look over their shoulders. 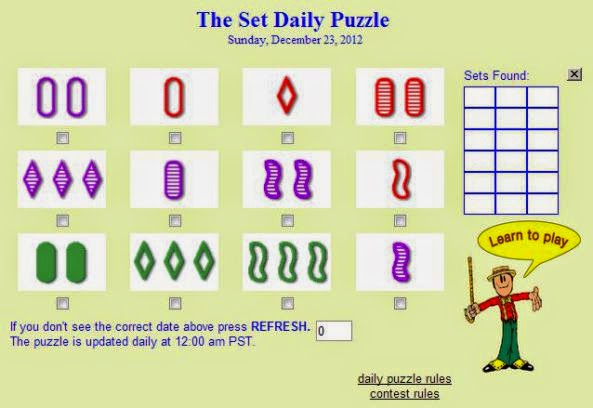 So all of THIS got me thinking about transformations of functions, families of functions and the like, so I made this: 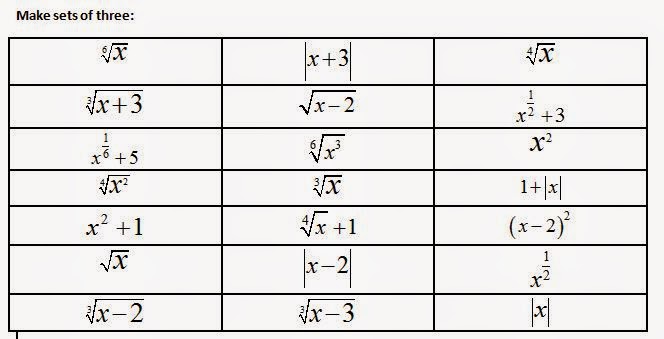 My co-teacher and I are going to try it out tomorrow as a warm up with a Pre Cal class that has really mixed ability levels.  We'll put them in groups of 3 or 4: make them each responsible for justifying what makes a set.  We won't give them any rules, just:  "Make a set, but be able to explain why these 3 can make a set."

I did make a SmartNotebook with the same table in it AND some sample pix of what makes a set in the actual SET game.  If they are really stuck, we will show those to see if we can't make some progress!

Would love feedback if you try this:  what went well, what suggestions for change?
Keeping my fingers crossed that this doesn't bomb!

My Love Fest with the Standards of Mathematical Practice: Episode 1

There may be much about the Common Core that I have issues with, but I absolutely LOVE the Eight Standards of Mathematical Practice. 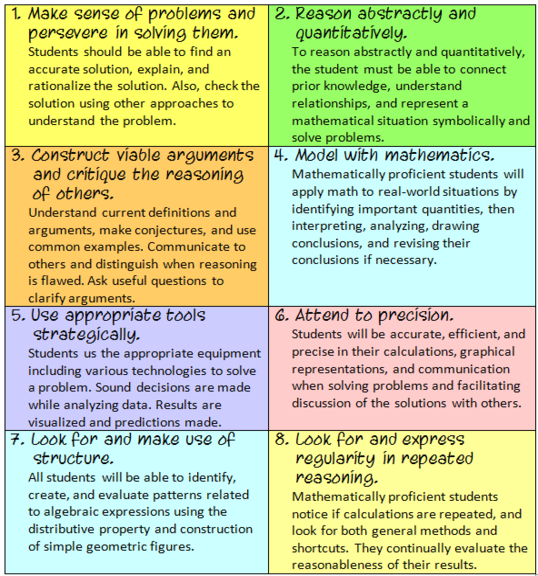 I find myself becoming more and more aware of making sure I am including these in every day lessons, not just those really FAB lessons (yes Mr. Kaplinsky, I am taking about you, since we just finished the In and Out Burger lesson!). Two of my favorites Standards are MP3 and MP6.

Yesterday, rather than going through the homework (a review of solving equations that included fractions, distributive property, combining like terms), I put the students in groups of 4 or 5.  Each group got 2 different colored chips.  This is what they did:

FIRST:  They had to assign roles.
THEN:
NEXT:
AFTER THAT:
FINALLY:
What my aide and I noticed:
NOTE:  My aide and I modeled how to do the Speaker and Responder roles before we let the kids go at it.  We had the students all be the Active Listeners and share how some of them would have approached the problem Mr. D and I modeled.  I believe this was a REALLY important part of the success of this activity.

After this activity I gave the Term Benchmark Test.   It involved everything from 1st Trimester.  It had eight "solve for x" questions.  They did remarkably well (on these 8 questions) ESPECIALLY on problems involving fraction coefficients.  I was over the moon.

Posted by Tina Palmer at 8:07 PM No comments: